the Belt and Road > Industries 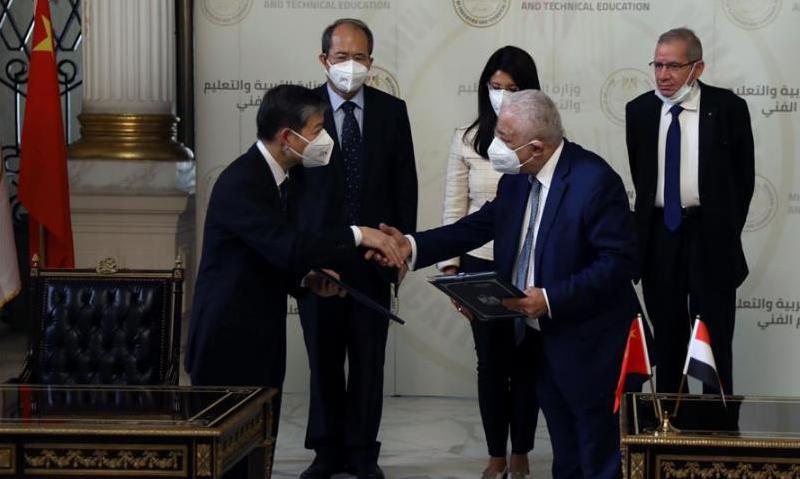 CAIRO, Sept. 7 (Xinhua) -- Egypt and China signed on Monday a cooperation protocol to teach the Chinese language in pre-university schools in Egypt as a second optional foreign language.

The protocol was signed by the Egyptian Minister of Education and Technical Education, Tarek Shawki, and the Chinese Ambassador to Cairo, Liao Liqiang.

"Egypt is keen to benefit from the unique Chinese experience in economic development as well as other fields," Shawki said during the signing ceremony.

He added that Egyptian-Chinese ties are deeply rooted as Egypt was the first Arab and African country to establish diplomatic relations with China in 1956.

"Today's agreement represents an illuminating image of the distinguished and fruitful relations between the two friendly countries, which we always strive to strengthen and support by all means to achieve the desired goals," Shawki said.

The minister said the Chinese side helps the ministry in many areas such as establishing solar power plants in schools, establishing workshops for technical education, installing electronic screens in secondary schools nationwide, and establishing smart classrooms.

According to the Chinese Embassy in Cairo, there are two Confucius Institutes in Egypt, one in Cairo University, the other in Suez Canal University, in addition to three independent Confucius classrooms in Egypt.

Luban workshop is the first project of international cooperation on vocational training supported by China's Tianjin Municipality, which aims at improving academic education of top technical talents and serving the local economy and society via vocational training.

In 2019, China provided more than 300 scholarships for Egyptians to finish master and PhD degrees, according to the Chinese Embassy in Cairo.

Meanwhile, Liao said the outbreak of the COVID-19 pandemic has not stopped cooperation between the two countries in the field of education.

"We have given each other's international students meticulous care and exchanged experiences in resuming classes. China has also donated 300,000 masks and other anti-virus materials to the Egyptian Ministry of Education and Al-Azhar University," the ambassador said during his speech.

The ambassador noted that the integration of Chinese teaching into the Egyptian national education system reflects the vision of the Egyptian government.

"Similarly, China will further open up education to the outside world to facilitate people-to-people exchanges between the two countries, and pave the way for building a China-Egypt community with a shared future," he added.

"We are willing to work with Egypt to implement the agreement step by step and strengthen cooperation in improving the proficiency of teachers, enriching Chinese teaching materials, optimizing teaching methods, and compiling syllabus," the ambassador said.