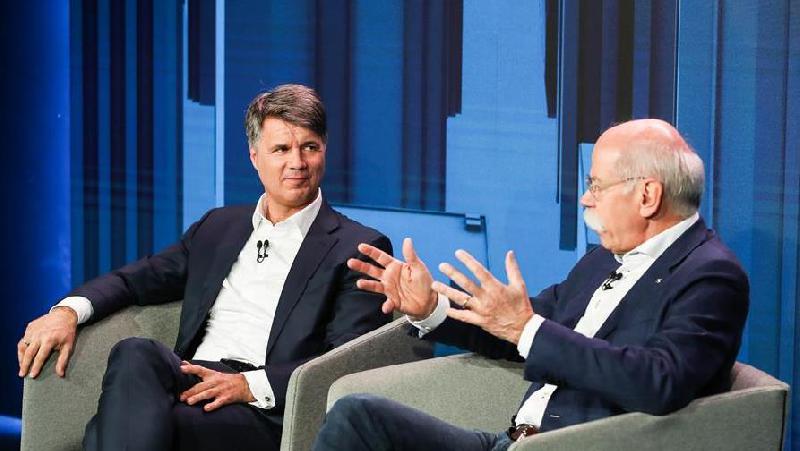 Harald Krueger (L), management board chairman of BMW, and Dieter Zetsche, chairman of the board of management of Daimler, attend a press conference in Berlin, capital of Germany, on Feb. 22, 2019. Daimler and BMW, two German luxury carmakers, revealed on Friday their plans to invest more than one billion euros (1.13 billion U.S. dollars) in the establishment of a new joint car sharing business. (Xinhua/Shan Yuqi)

Daimler and BMW, two German luxury carmakers, revealed on Friday their plans to invest more than one billion euros (1.13 billion U.S. dollars) in the establishment of a new joint car sharing business.

"We are creating a leading global game changer," said Harald Krueger, management board chairman of BMW at a press conference in Berlin.

Daimler and BMW are planning to merge 14 of their existing car sharing businesses, such as car2go, DriveNow as well as booking platforms and cab renting apps like ReachNow and MyTaxi.

According to Daimler and BMW, the combined number of customers of the services to be merged currently amount to 60 million worldwide.

"Further cooperations with other providers, including stakes in startups and established players" would also be taken into consideration, said Dieter Zetsche, chairman of the board of management of Daimler, at the press conference.

The merger of their car sharing businesses is expected to create more than 1,000 new jobs worldwide.

"China is of course a very interesting market for these five new joint ventures of Daimler and BMW," a Daimler spokesperson told Xinhua on Friday. At this point, however, it would not be possible to give any precise figures.

Daimler is currently establishing a premium car sharing service in China with Chinese carmaker Geely. At the moment, Daimler was "waiting for approval" from the Chinese authorities to start business, the spokesperson added.

In Daimler's and BMW's domestic market Germany, car sharing services are becoming increasingly popular. The number of customers increased by 16.6 percent to a total of 2.46 million in 2018, the German car sharing association (BCS) announced on Wednesday.

Geely confirms use of special options strategy in acquisition of Daimler

Geely says not subject to fines over Daimler stake disclosures