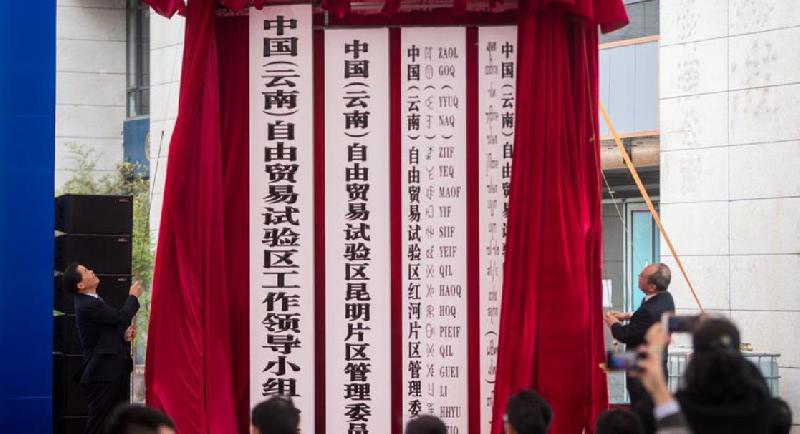 BEIJING, Aug. 30 (Xinhua) -- China's new pilot free trade zones (FTZs) were inaugurated Friday, in a bid to press ahead with reform and opening up.

The Guangxi pilot FTZ aims to step up cooperation with the ASEAN region. The total area of Guangxi's pilot FTZ is nearly 120 sq km, covering areas of Nanning, Qinzhou Port and Chongzuo.

Jiang Liansheng, director of the regional department of commerce, said Guangxi will fully implement the pre-establishment national treatment and the negative list management system for foreign investment, deepen economic and trade cooperation with ASEAN, promote reforms in fields such as investment, trade and financial services, and strive to improve the level of development.

According to a master plan released by the State Council on Monday, the six new pilot FTZs are located in Shandong, Jiangsu, Guangxi, Hebei, Yunnan and Heilongjiang, bringing the total number of the country's pilot FTZs to 18.

Neighboring Yunnan Province also announced the inauguration of its pilot FTZ on Friday.

Wang Guangfu started his business in Dehong, which borders Myanmar, in 2000. Wang's company launched an online wholesale platform in 2017, providing services to more than 6,600 Myanmar retailers and developed a mobile phone shopping application for individual customers.

"I look forward to seeing the implementation of policies related to the pilot FTZ, which will promote the development of export-oriented industries," said Wang, who attended the inauguration.

A total of 28 enterprises announced at the ceremony their intention to settle in the Kunming FTZ area. With a total investment of 5.46 billion yuan (763.6 million U.S. dollars), the enterprises cover industries including warehousing and logistics, biology, information, new energy technologies and import and export.

According to the plan, the pilot FTZ of Shandong Province in east China will feature new measures to nurture new businesses, develop the marine economy and explore China-Japan-Republic of Korea economic cooperation at the sub-national level.

The Shandong pilot FTZ covers three areas as well, including Jinan, the provincial capital, and coastal cities of Qingdao and Yantai.

Zhang Deping, director of the Department of Commerce of Shandong Province, said the core of the pilot FTZ will be institutional innovation. Innovative exploration will be carried out in fields such as business environment, investment and trade facilitation, the opening-up of the financial sector, science and technology, marine economic development, as well as the cooperation model of China-Japan-Republic of Korea.

"The establishment of the pilot FTZ will bring more supervision and actual operation convenience to our company, effectively reduce costs and enhance the international competitiveness of import and export enterprises in the zone," said Wu Shaoyong, president of the company.

Situated in the northernmost province of China, the Heilongjiang pilot FTZ will feature the all-round revitalization of the northeastern regions, Sino-Russian exchange and cooperation, and the opening up and cooperation in Northeast Asia.

China started piloting FTZs in Shanghai in 2013. The country had established 11 more in its coastal regions including Guangdong and Fujian and inland provinces such as Shaanxi and Sichuan.

With the new zones, China's pilot FTZs now cover all the country's coastal provincial-level regions. It is also the first time that the country has set up pilot FTZs in border regions.

China to roll out more successful practices of pilot FTZs

China to hold intl forum on development of FTZs: CCPIT