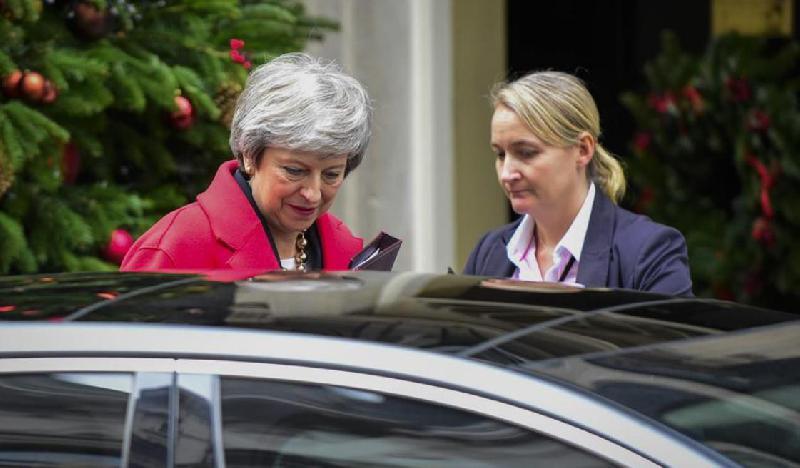 British MPs on Tuesday voted by 311 to 293 to find ministers in contempt of parliament over their failure to publish the full legal advice on the Brexit deal.
It is the first time that the British government was held in contempt of parliament in the country's modern history.
The British government will publish its full legal advice on British Prime Minister Theresa May's Brexit deal after MPs found it in contempt of Parliament for not doing so.
The vote came before the main debate in the parliament, which will last for five days before the historic parliamentary vote on Dec. 11 on the UK-EU Brexit deal.
In the four-hour debate prior to the Tuesday vote, some members of parliament were angry over the British government's refusal to publish the full legal advice ministers received from Attorney General Geoffrey Cox.
Instead, the government published just an overview of Cox's legal advice.
Opposition politicians protested that by limiting the information released, the government had ignored a vote in the House of Commons demanding they release the full advice.
Sir Keir Starmer, Brexit spokesman for the main opposition Labour Party, said in the debate the government had disputed an order of the House of Commons, and that was contempt.
The leader of the House of Commons, Andrea Leadsom, told MPs the use of the contempt motion is very rarely in parliament. She issued an appeal to MPs to refer the motion of contempt to the Parliamentary Privileges Committee for a ruling.
May planned to open the Brexit debate by insisting Britain is on course for a better future outside the European Union. She said her deal "takes back control of our borders, laws and money."
With MPs from her own Conservative benches threatening to join opposition politicians by voting against her deal, May faces the prospect of a humiliating defeat in the Dec.11 vote.
Political commentators said that the result of the debate will determine the fate of Brexit, but so far nobody knows precisely what will happen if MPs reject the deal.
Possible outcomes include a confidence vote in the government, leading to a general election to a second referendum on EU membership.
Also on Tuesday, an attempt by British ministers to refer the whole issue to a committee of MPs was defeated earlier by four votes.
The debate began after an intervention by House of Commons Speaker John Bercow.
The move came after opposition parties led by Labor and the Democratic Unionist party attacked ministers for publishing only a summary of the Brexit advice, despite a vote on Nov. 13 demanding full publication.
Bercow said there was an "arguable case that a contempt has been committed" and set aside time on Tuesday to debate the issue -- just as members of parliament were meant to be beginning a five-day debate on Brexit itself before their historic vote on the divorce agreement on Dec. 11.
Last month, the House of Commons unanimously passed a Labor motion calling for the release of any legal advice in full that had provided to ministers on the proposed withdrawal agreement and framework for the future EU-UK relationship.
However, the government responded on Monday by publishing only a 43-page summary of the advice and taking the unusual step of sending the British attorney general, Geoffrey Cox, to the House of Commons to make a statement and answer questions from members of parliament.
The full legal advice given to ministers is understood to run to several thousand pages.

​Bank of America takes key step of its Brexit preparations

​Britain could lose 8 %of GDP growth with "Disorderly Brexit"

Brexit deal vote on Dec. 11 as May faces tough grilling in Commons